SLT Teams is back! And, as they did in 2021, are sure to bring exciting racing dynamics, tactical decisions, and and extra layer of competitiveness to this year’s Championship Series.

Last year, it was SLT Team Eagles that took the overall victory, after Alex Yee finished top of the Men’s leader board and Jess Learmonth dominated in three of the women’s races. However, the Scorpions were never far behind, and with the tactical mind of Chris McCormack, the backing of Bahrain Victorious, and the athletic brilliance of some of their key team members, they could certainly be one to watch this year.

The teams were designed to hand power to athletes, fans and stakeholders and help shape the future of the sport. That is now more true than ever. This year, we introduced the new SLT Fan Team. This allows our fans to Buy a Membership and vote on the decisions that will impact Team Cheetahs most this season. You can vote on the Team Kit, who gets to use any Short Chutes, and even who is on the team! This is fantasy triathlon, but in real life and you can get involved too.

SLT Teams are managed by five triathlon legends, who take the initial lead as Team Managers as part of a balanced ecosystem that will utilise multiple different inputs to help guide its development, structure and rules over the coming years. 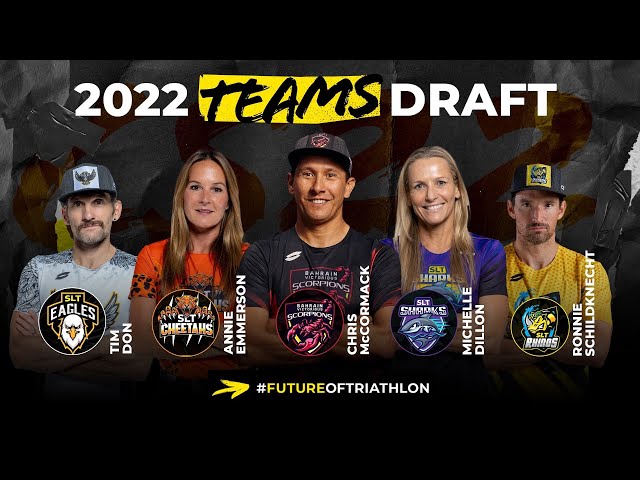 How many athletes will be drafted onto each Team?

The 40 athletes will be split equally between each Team. That means each Team Manager will select four female and four male athletes. For alterations, Wildcards and exceptions please see the earlier SLT Teams FAQ.

How does the draft work?

Round 1 is the retained list where Managers are given the option to retain an athlete from their 2021 Team. If they choose not to retain they get a first pick, before a snake draft which is determined by a random draw. The female draft takes place first followed the male draft. More information is available here.

What about the Fan Team - SLT Cheetahs?

Fan Team owners were given the opportunity to rank the athletes in order of preference, so the next available athlete in their list was always drawn.

Can I watch the draft?

There are five Teams, each with a Team Manager who has a vast knowledge of the sport and has been a top level elite athlete. They select their Teams via a draft.

What are the SLT Teams and who are the Team Managers?

How many athletes are on a Team?

Each team will consist of four female athletes and four male athletes. Team Managers can source additional replacement athletes for injuries and any other gaps will be filled via a Wildcard system.

How will Wildcards be allocated? And what about injuries?

Any team with less than their complement of four male or four female athletes will get to pick from any Wildcards racing individual events. The Team with the fewest points in the overall SLT Teams leaderboard will get to pick first.

If all Teams have their full allocation of four male and four female athletes then Wildcards will be allocated as additional athletes with the Team with the fewest points in the overall SLT Teams leaderboard picking first.

All Wildcards and Wildcard picks will be communicated via Super League’s digital channels in the week leading up to each event.

What is the points scoring system?

The highest placed three men and three women from each Team at every race of Super League Triathlon’s 2022 Championship Series will contribute the points they earn as individuals to the Teams leaderboard. Also all points accrued via the swim, bike and run leaderboards will count.

What about the Short Chutes?

What is the prize money?

SLT Teams is adding $320,000 in prize money. It is also somewhat of a redistribution of wealth in triathlon as every athlete who races will earn money, and has the incentive to really push themselves to contribute to their team and maximise the chance to earn more. By guaranteeing the payment to every athlete via SLT Teams, it also supports up and coming talent and those who are not at the very top of the game to continue to compete, develop and grow. Only athletes who compete in all five Championship Series events are eligible for a slice of the Teams prize pool.