Ironman world champion Anne Haug has enjoyed the most special of years since her momentous day in the lava fields of Kona.

The former short course star has transitioned into a long course athlete who has achieved the dream of all those who step up in distance.

Haug has not forgotten her roots, however, and returned to the very shortest of short course racing with an appearance at the SLT Arena Games in Rotterdam.

We caught up with her for an in-depth interview. Here’s part one of what she said:

Anne on her Kona win

It was really special for me because my preparation was everything other than perfect because I was injured almost half a year before that. I couldn’t run.
I managed to qualify on the last possibility in Copenhagen so my preparation was non-existent to be honest.
On the day everything came together and in Ironman it is half mental and half physical, and if you are just prepared to give it all on the day and fight for every place and try to make the finish line in the fastest way then everything is possible.
I had almost the perfect day and my dreams came true. Anne on how winning Kona changed her life

My life has got quite busy. It’s a big deal to win the race because the year before I got third and no one was interested in that but winning was special, especially the combination with Jan (Frodeno). He did the record, I was the first female German, we have the same coach. It was an interesting story and the media interest was just crazy.
For me personally I am still the same. I am still hungry for being better and improving myself.
It hasn’t changed me.

Anne on achieving her dream

My whole career I always set myself a goal. To start with it was to race second division in triathlon.
Then I achieved it and thought I would have this satisfaction and I would be done but it didn’t change me and another dream grew.
Next it was I wanted to race European Cup. Then I achieved it and didn’t get the satisfaction either.
Then it goes further and further – World Cup, Olympics. It’s the same with Kona. I thought if I would win the biggest race in Ironman I would finally have the self happiness and satisfaction but it never came.
It’s why I keep going because I still think there is more to come. It’s not in my hands if I win it again but it is in my hands to get a performance and I think there must be one because I have been doing Ironman for just two years so it can’t be the end of my improvements.
I want to get on the startline again and show a better performance. If I win again I am lucky. If not then I am happy with a better performance. Anne on her run

I ran as fast as I could but in my head there is a little man saying ‘run, run, run, and be as efficient’. That’s different to short course where you run as fast as you can and in Ironman run as efficient as you can and don’t make mistakes.
Coming from short course you know you have to hold back but driving me is that it must be possible to run faster and maybe I can squeeze out one or two minutes or maybe more. Anne on Super League Triathlon and the SLT Arena Games

I allow myself to compete here because I want to embrace racing again and I want to show how good the short course athletes really are.
Most people think ‘you are Ironman world champion, you kill everyone in the race’ but maybe it’s my thing to say ‘I am an Ironman athlete and I can’t keep up with them. They are just so super fast.’
The older I get the more relaxed I get about that. I allow myself to race here knowing I can’t win and normally I would never sign up for something like this but I have followed Super League since it started and am fascinated.
I am honoured to race it and show everybody you can’t buy anything just because you have a world championship title. 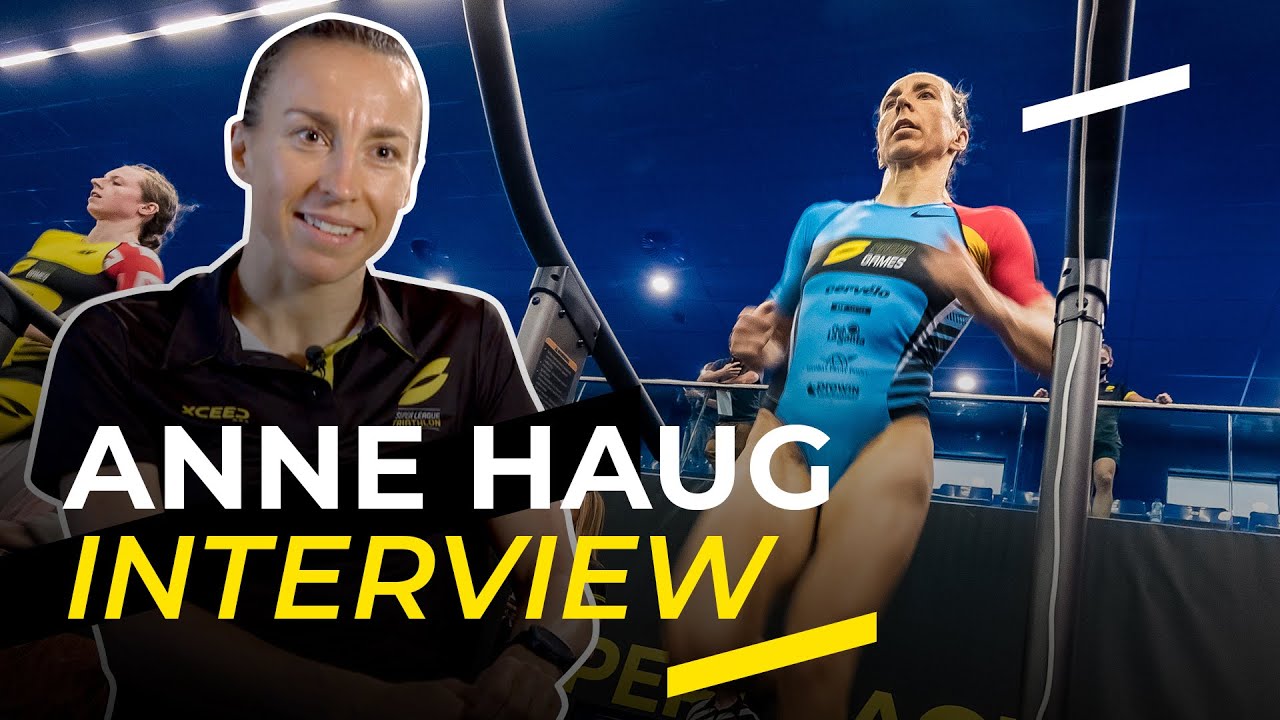