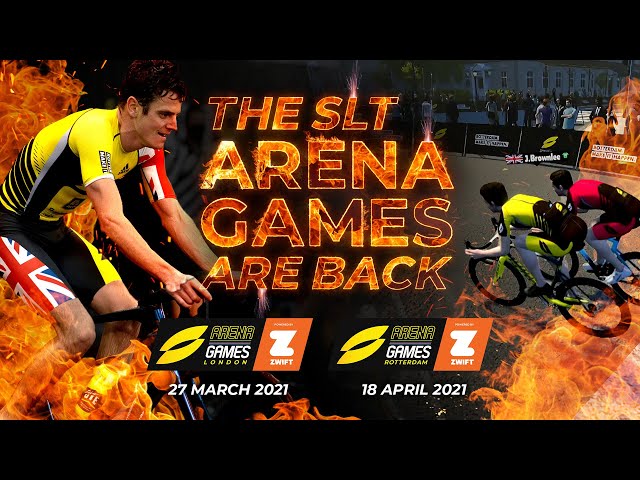 The SLT Arena Games Powered by Zwift are back and returning to Rotterdam.

After a stunning debut in the Netherlands in 2020, Rotterdam will once again play host to the best athletes in the world doing battle in Super League’s unique mix of real life and virtual racing with the Zwemcentrum playing host on April 18.

Get into the races ›

The SLT Arena Games Rotterdam Team Championships Powered by Zwift is offering every triathlete the chance to be inspired by the best in the world and join together to compete for fun, fitness and prizes.

With six races over three weeks, and all abilities welcome, this is a chance to race and win some great rewards, including the chance for your team to enjoy an exclusive Super League prizes.

There will be a three-week competition window with one virtual running and one virtual cycling race per gender each week on Zwift (see schedule below for exact dates and timings).

There will be separate races for men and women with each having its own results. Points earned in each race will then contribute to the mixed gender team ranking. The teams with the highest number of accumulated points at the end of the series will win the chance for an exclusive Super League prizes.

What is the SLT Arena Games Team Championship powered by Zwift?

Super League Triathlon and Zwift introduce The SLT Arena Games Team Championships powered by Zwift. We are giving triathletes the chance to be inspired by the best and come together to compete for fun, fitness and win a virtual meet and greet with a star Super League athlete for your team.

There will be a three-week competition window with one virtual running and one virtual cycling race per gender each week on Zwift.

Athletes compete individually in the races and will contribute points to their club as per the following points system. Every athlete finishing will contribute at least 1 point to their team.

What is the scoring system?

Every person who competes will earn at least one point for their team for each race they finish. View the full scoring system above.

Where can I find the results?

Results will be published immediately after each race on the event page.

Who wins prizes and what are they?

Men’s and women’s races will be scored separately. Points won by the individuals will contribute to the mixed gender team ranking. The team with the highest number of accumulated points in each gender ranking at the end of the series will win the chance for an exclusive virtual meet and greet with a star Super League athlete over the weekend of the SLT Arena Games Rotterdam powered by Zwift.

The series is open to anyone.

How do I register?

When do the races take place?

View the schedule for the race above.

What courses are being used?

View the courses above.

What is the SLT Arena Games Powered by Zwift?

The SLT Arena Games Powered by Zwift is an innovative concept that blends in real life and virtual racing to deliver a new level of immersive viewing experience. It took the triathlon world by storm in its debut in Rotterdam and is back in two epic locations for 2021. With further innovations and more live data and in your face cameras the events will get closer to the athletes than ever before.

When are the races?

London plays host to the first 2021 edition of the SLT Arena Games Powered by Zwift on Saturday March 27. It takes place at the London Aquatic Centre on the Queen Elizabeth Olympic Park.

Rotterdam will host for the second time on April 18, with the Zwemcentrum taking centre stage for all the thrilling action.

The SLT Arena Games Powered by Zwift is an amalgamation of in real life and virtual racing and provides an immersive viewing experience that allows fans to get up close and personal with the best triathletes in the world and enjoy live data.

The swim leg takes place in an Olympic sized pool while the bike and run disciplines are completed on Tacx Neo2T smart trainers and self-powered curved treadmills with the power and speed of the athletes turned into a visual race via Zwift’s online platform.

The TV broadcast brings together the best of all these elements to produce a captivating event, with in your face cameras of athletes in an enclosed environment showing their effort and raw suffering like never before.

What format will the athletes race?

That means three short, sharp and unpredictable stages that all feature swim, bike and run and offer no respite to the athletes with the added challenge that the order of the disciplines is shuffled each time.
There is a very short break of around a couple of minutes between the three stages, with each starting at a set time. That will reward those that finish quickest by giving them a longer rest period.

The results of the three individual stages will combine to determine the overall winner.

What order will the races be in?

What distances will the athletes race?

How will the point scoring work?

For each of the three individual stages in the Triple Mix format all ten athletes will be awarded points. It is as simple as 10 points for first place down to one point for 10th.

The cumulative totals at the end of the Triple Mix will confirm the winners.

What if there is a tie?

In the event of a tie the athlete with the best result in the final stage of the Triple Mix will be placed higher in the rankings.

Which Zwift course is being used?

Super League has recruited the biggest names in the sport with ten men and ten women competing. There are Olympic medallists, world champions and even a couple of up and comers in a stellar field.

You can view the first athletes to be announced here by clicking here. Stay tuned for many more big names to come.

Is there prize money?

Yes, the Pros will be racing for cash to add extra incentive to race at full throttle throughout.

Is the event COVID secure?

Yes. As elite sports events the SLT Arena Games Powered by Zwift fully comply with all applicable local and national regulations. It is also designed with social distancing in mind with athletes swimming in their own lanes and bike and run stations more than 2m apart.

How can I watch?

You can see the confirmed broadcaster in your region in the Race section. We will publish full details shortly.

Jenkins to step up triathlon comeback in London